The sun sets over north-east London, May 2017

As the last post closed, my local football team was sinking. Now it’s sunk: it seems Leyton Orient was both the victim of old-fashioned asset-stripping and of eccentric, unpredictable behaviour by its owner. Ironically, having passed the point when demotion from the Football League was unavoidable, they promptly went out and won a game. And meanwhile, struggling amongst the lower rungs of the Premiership, Hull City – the team I have supported since I were a lad on Humberside – were gifted a home tie against no-hope, already relegated Sunderland – and promptly lost, so now themselves cower beneath the shadow of the guillotine.

Clearly Hull is not currently a place to seek sporting glory – but look, it’s the City of Culture, and my old school pal Townsend and I set off on a Quest, a latter day Quixote and Panza, cruising north in my elderly-but-still-elegant Cherry-Red Motor, which could, come to think of it, rather suit the name of Rosinante….

Our journey took us first to Stratford on Avon, to catch a performance of Richard Bean’s play”The Hypocrite”. This was a collaboration between the Hull Truck Theatre Company and the RSC, a production which had played to sell-out audiences in Hull prior to transferring down to the Stratford Swan.

The play treats on the life and times of Sir John Hotham, a seventeenth-century Sheriff of Hull, whose decision to close the city’s gates against King Charles 1 triggered the English Civil war. Now Mr Bean is a skilled farceur – “One Man, two Guv’nors” has been a huge success all over the world – and his script finds a lot of fun in the vagaries of Hotham’s life. But ultimately – although many in the packed audience at the Swan clearly loved every minute, I came away feeling a tad uncomfortable. After all civil war is a horrible thing, with neighbours slaughtering neighbours – there must have been parallels in our times for instance not long ago in Bosnia, where events didn’t produce too much in the way of comic material.

However, as always it was good to be in Stratford – and my tale returns there imminently. But the day after the play we took farewell of our pal Charlie Twigger, our ever-cheerful and generous Warwickshire host, and made our way north and east, through the fenland shires to one of the great legacies of 1960’s Labour Party politics – the Humber Bridge.

Townsend  (who is a life-long politics addict)  tells me that this startling, majestic construction  – still one of the longest single-span bridges in the world – was given the green light in 1966 by Prime Minister Harold Wilson in an attempt to generate pro-Labour sentiments on Humberside during the run-up to a crucial by-election. The message to his current successor as party leader is clear – “Go Corbyn, go build bridges….”

Before crossing the bridge, we stopped for a cuppa in Barton on Humber, the small township at the southern approach . Have you heard of the Ropewalk Museum? We hadn’t. A firm called Hall’s started making ropes there in 1787, and continued supplying British navies, both royal and merchant through wartime and peace right through until 1989. Now the long narrow factory building combines art gallery and fascinating museum. When we were teenagers – oh so many years before the bridge (which wasn’t completed until 1981) – we would often take the paddle-steamer ferry from Hull to New Holland, sometimes to play football against Wintringham School in Grimsby. But we weren’t aware of the Barton rope-makers, who at that time would have been supplying the now long-defunct Hull trawler fleet –  in those days our town, as our Headmaster constantly reminded us,  was the Biggest Fishing Port in the World.

The ferryboat trip cost two bob, as I recall (ten P to you) and lives in my memory as indelibly romantic. You could buy a tea or a Bovril and sit on deck as you sailed the mile-wide water to Lincolnshire, or go below and watch the great brass-and-copper pistons driving the paddles as they churned the dark brown, mud-filled estuary swell. After the bridge made the ferries redundant, one of them – the Tattershall Castle  – chugged south to become a floating pub on the Thames next to Waterloo Bridge. A couple of years ago it returned to Hull for refurbishment, and will shortly be again in place beside the Albert Embankment – so check it out when you’re in town (link below).

And so we crossed the bridge, paid a £1.50 toll and drove into God’s Own County. We’d checked on-line, and found that, notwithstanding Hull’s Year of Culture there were no professional theatre shows at all that weekend – the local producing company Hull Truck being between productions, and the big touring house, the New Theatre, was closed for refurbishment – the timing of which seemed a bit odd, to say the least. (However, it’s due to re-open in September, so there will be time for three months’ worth of Culture before the year’s end.) Nothing daunted, at the City Hall we found the real Humberside culture we knew in the fifties  – a programme of professional wrestling! 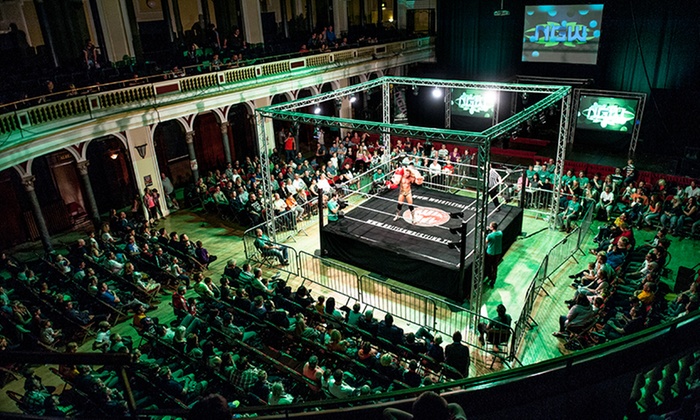 Wrestling isn’t quite what it was in the old days – it’s now much more family-friendly (lots of kids in the audience) and there’s an awful lot of sparkling Spandex, but the shameless posturing, the wonderfully fake suffering is on full display, and surely provides we theatre buffs with a link to ancient traditions, when for example a professional would be hired by the guilds at York

and Beverly to rampage as the Devil in the mystery plays! The modern wrestlers are clearly all highly-trained gymnasts, governed by strict health & safety régimes. I found this poster from yesteryear for wrestling at the Madeley St Baths, which gives just a hint of what it was like in our day – the sweat and the swearing, the beer-fumes and fag-smoke, the men howling and grunting, the ringside women baying for blood.

After the wrestling we retired to the Old English Gentleman in Worship St, which despite the current closure of the theatre still functions as a classic stage-door pub. It was at the Hull New that my life in the theatre began, as a student assistant stage manager being paid a princely one pound per week. I’ve been back to the New a few times over the years, and was I must confess a tiny bit gratified to find on the pub wall a frame

d relic from my days as something of a “TV name”, meriting a billing on a tour poster (just) above the title…..

But there’s a lot more to Hull culture than sweating, Spandex and acting – there’s poetry! Two great poets are forever linked to Hull and its history – one by being born at nearby Winestead, the other by serving as the University’s librarian for several decades.  Your starter for ten – who “by the tide of Humber would complain” and worry about “Time’s winged chariot”? Supplementary question: which great modern poem has its opening line engraved on the floor of Hull’s Paragon Station, and its closing lines on a wall-plaque at London’s King’s Cross? These pictures provide clues

We had a great time in amazing weather. As the summer and autumn unfold, if you get the chance – hie you to Humberside! There are lots of cultural goodies in the pipeline – Barry Rutter’s Northern Broadsides company doing “Richard the Third”,  a sea of Hull citizens’ naked blue bodies in Spencer Tunick’s pictures at the Ferens Art Gallery, a new work for voices by Opera North,  inspired by and performed at Winestead Church  – and lots, lots more.  The old city at the junction of the River Hull and the Humber Estuary is rich in history of ancient maritime trades, of protest against the Crown, against the Roman church and above all against slavery. There are ships’ chandler stores turned art galleries, there is a spectacular deep-sea aquarium called The Deep, there are waterside restaurants, ancient pubs – and still the best fish and chips this side of Whitby…

The nearby countryside of the East Riding is glorious, its crown jewel the exquisite town of Beverley, technically a market town but essentially a miniature cathedral city, the Minster at its heart one of the gothic glories of western Europe.   And Beverley now has its own repertory company, the East Riding Theatre – watch this space.

This post has turned into a travelogue  In Praise of Hull – there’s a lot more to come  – what’s going on in London, how we celebrated Shakespeare’s Birthday in Stratford, and – unavoidably –  the Great Chinese Shakespearian Take-away….Don’t go away. Part Two will be along shortly.